When running into issues with SQL Monitor connecting to the monitored instances, the first troubleshooting step is to run  through the steps in here.
Sometimes when running the WMI Test, however, you can run into the following error message: 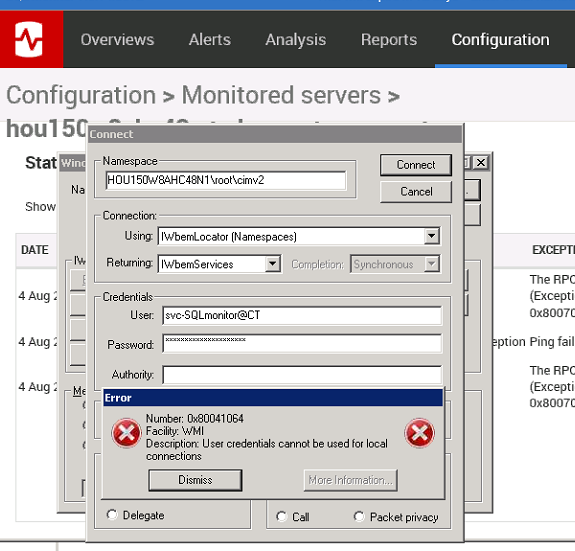 This error message doesn't relate to the connection issue, but is usually an issue with how the test was conducted.
This can happen in two ways:
1. The namespace format is not done as follows:
\\myserver.example.com\root\cimv2
You need to make sure to include all the backslashes.
2. Alternatively it may happen if you run the WMI Test against the machine itself that you're running the WMI Instrumentation on and include the credentials. (This situation normally shouldn't happen, however, as the SQL Monitor Base Monitor and the monitored instance should be on separate machines.)
You can workaround this by doing the following:
Remove the credentials in order to have the machine run the WMI test against itself with the account that is currently logged in, or, run the following in command prompt:
Have more questions? Submit a request
Follow