This allows you to use the add-on without having to pre-install the Module and also ensures that you are using the latest version released.

This warning indicates that the add-on couldn't successfully carry out this update due to connection issues.

- Network issues\configuration: the system needs to be able to access https://www.powershellgallery.com/api/v2

You will need to pre-install the SCA PowerShell Module using the SQL Toolbelt installer, you can find this in the customer portal.

It's recommended that you specify the SQL Change Automation version you've pre-installed in the task settings; this will prevent the add-on from attempting to contact the PowerShell Gallery and will speed up the build/release process.

If the system can connect to the PS Gallery then this is caused by using an outdated add-on that doesn't force the connection to use TLS 1.2 (or if you're using a PowerShell scripted that you've authored you haven't added the necessary code).

If you are using an add-on you'll just need to update it to the latest version following the normal update process in the server that you are using (TeamCity, Bamboo, Jenkins or Octopus Deploy).

If you are using Azure DevOps the add-on automatically updates when there's a minor update, however you can be locked on to an earlier major version of the task in which case you will need to manually change to the last version (4.* or newer): 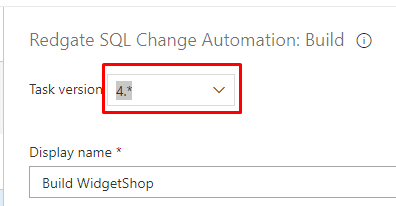 If you are using a PowerShell script you can workaround this issue by adding the following at the start of the script: